An array of Spanish, Cuban, and Mexican musical selections.

A Hand of Bridge opens at a card table as two bored married couples are playing bridge. As they each play their hand, the singers individually deliver a brief aria revealing an inner monologue in which each declares his or her inner emotions or desires.

Gisela in Her Bathtub, by Canadian composer Neil Weisensel and librettist Michael Cavanagh, is a 15-minute work is a glorious poke in the eye at the traditions, archetypes and excesses of grand opera. “Consider if Mel Brooks had decided to now move from Broadway to the opera stage.” – NOLA.com

Blue Monday (Opera a la Afro-American) is considered to be the first piece of symphonic jazz, and the first attempt to join classical music forms with jazz and the African-American culture of Harlem. The 30-minute opera will be performed by an African American cast of soloists and chorus.

An Embarrassing Position is a comic opera based on a sketch of the same name by New Orleans author Kate Chopin. The piece is set in the New Orleans of the 1890s. The composer, Dan Shore, is on the faculty of Xavier University in New Orleans, and is completing his latest opera, “Freedom Ride” – from which the Marigny Opera House and Longue Vue Gardens presented selected scenes this past March.

“Frauenliebe und Leben” by Robert Schumann is a 20-minute song cycle that traces the life and love of a woman, presented from her point of view. It will be sung by 9th Ward Opera Company soprano Anneka Olsen, and accompanied by Dave Hurlbert (Executive Director, Marigny Opera House) on piano. This performance will include a newly-commissioned modern dance piece choreographed and performed by Maritza Mercado-Narcisse.

The second half of the performance is the forty-minute comic opera “From Maid to Mistress” by Giovanni Battista Pergolesi. This masterpiece of the baroque tells the tale of a conniving maid and her gullible master. Kathleen Westfall (Director and Founder of the 9th Ward Opera Company), soprano plays Serpina, Jacob Penick, baritone plays Umberto, and local actor Dennis McCann performs the mute role of Vespone. Dave Hurlbert accompanies on piano. 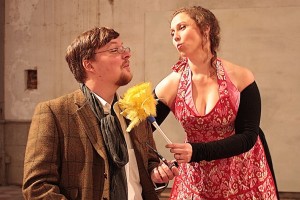 The Ninth Ward Opera Company will perform a night of two operas.

Tantalizing audiences, the opera company will first perform Cox and Box, a libretto written by F. C. Burnand with music by Arthur Sullivan. The one-act opera tells the story of two men who are living in the same apartment but do not know it. One man works during the day and one at night, so the landlord decided to take double the rent for the same space. The two men find out about the scam during the course of this opera — and the results are bound to entertain.

(Also known as The Long-Lost Brothers, Cox and Box was renamed for the 1847 farce Box and Cox by John Maddison Morton – and was Sullivan’s first successful comic opera. Sullivan composed the piece with Burnand in 1866, five years before he wrote his first opera with W.S. Gilbert, launching a 25-year partnership called Gilbert and Sullivan.The Victorian-era writing team of librettist W. S. Gilbert and composer Arthur Sullivan together wrote 14 comic operas between 1871 and 1896, including H.M.S. Pinafore, The Pirates of Penzance and The Mikado.)

For their second performance at UNO, the Ninth Ward Opera Company will perform Trial by Jury, a well-known opera by Gilbert and Sullivan. Set in a court of law, a jilted Angelina sues her playboy fiancé Edwin for damages after he broke off their engagement. The opera includes a cast filled with comic characters determined to keep audiences laughing. 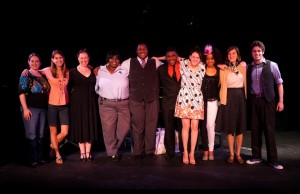 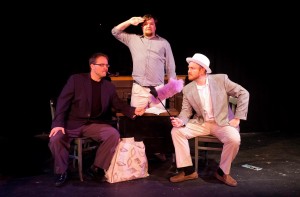